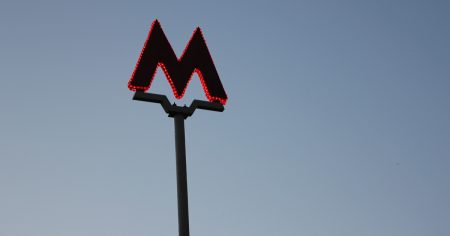 Amongst the many investments and changes made to welcome tourists at the 2018 FIFA World Cup, Moscow Metro wayfinding signage needed some attention. Moscow Metro infrastructure was first built in 1935 with many expansions, resulting in a variety of different signs implemented over the years. There were no signage guidelines, no standard typefaces or pictograms. The signage was in Russian, written in the Cyrillic alphabet creating a huge challenge for visitors.

In 2014, the Moscow Department of Transportation engaged CityID and Billings Jackson Design to develop a unified design solution, including the creation of new signage, maps and a new typeface, the Moscow Sans, incorporating both Cyrillic and Latin alphabets.

The pilot test of the proposed signage was conducted in 2015 and was expanded over the last three years. By May 2018, lobbies and passageways in 111 stations and platforms in 23 stations had the new signage and a further 34 stations were set to receive new signs in the lead up to the World Cup, according to Moscow Mayor official website.

Any tourist travelling to a foreign country without knowing the language can relate to the difficulties faced when trying to navigate through an unfamiliar city. That’s why intuitive wayfinding systems are the best way to go, the less signage you need the better. Architecture, art, placemaking, colour schemes and other features can be used to guide visitors throughout a space in a seamless way. If signage is required, icons can sometimes replace text providing an instantaneous understanding of the message.

A great example of the use of icons in a major international event is the Mexico 68 Olympics. The designer Lance Wyman chose to use icons in totems, tickets, stadiums and everywhere else possible, creating a wayfinding system that could be understood by the attendees regardless of the language they spoke. See example below and check out more photos on our Instagram: @instaptc