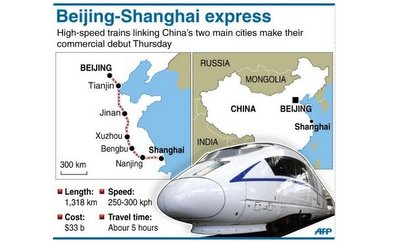 While China and Australia vastly different culturally, physically, and economically, a recent article in the Financial Review highlights something we have in common — both countries have a rail network that is required to cover an enormous amount of ground.  According to this article, the contrast between our countries’ transport systems on long-distance journeys is huge, as China’s new high speed train network outstrips the rail network on offer in Australia.

Whilst a 1200km rail trip from Shanghai to Beijing, on China’s high speed train ‘Harmony’ took just 4 hours and 55 minutes, a similar journey here in Australia from Brisbane to Sydney (280km less in distance) took  an epic 16 hours on the outdated  XPT, known in Australia as the “Express Passenger Train”.   Harmony sat on 302 km/h with a total cost of $186 for a first class ticket, whilst the XPT averaged 63 km/h and cost $128.00 (first class).    Whilst the XPT was cheaper, the trip took a considerable amount of time.

China has invested significant funding into its transportation system and is considered to have some of the world’s best infrastructure.  According to thediplomat.com, “China has developed the longest network of high speed railway in the world (about 16,000km with the aim of adding another 16,000km by 2020), as well as some of the best technologies related to high speed railway development.”

Perhaps this Chinese technology in rail networks will make its way to Australia and the XPT will make a fast exit.