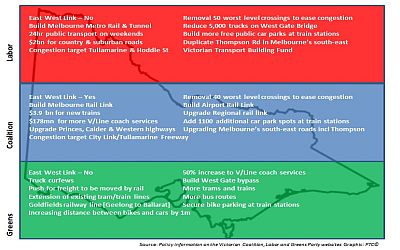 In the days counting down to an election the promises and future party policies are announced in rapid fire as last ditch attempts to persuade the undecided.  Every speech is an attempt to impress the overall electorate with the “trust us – we know what you really really want” persona of political parties.  This process has magnified during the current Victorian election campaign cycle, where the race is tight and the need to impress, persuade and goad has reached an all-time intensity.

The three main parties’ policies regarding roads, traffic, public transport and parking have many targeted issues in common, even if the proposed solutions differ.  Victoria’s most controversial transport project is the East West Link.  This project has the aim of reducing congestion on the Monash and West Gate Freeways by completing an 18 kilometre cross-city connection extending across Melbourne, including tunnels running from the Eastern Freeway to the City Link.  The current Napthine Coalition government has signed contracts to begin the project with a heavy $1.1 bn cancellation fee.  Both Labor and the Greens do not support the East West link.  Next month the two Councils of Yarra and Moreland will challenge the legality of the current contracts in the Supreme Court.

However the majority of Victorians may not be in agreement with Labor or the Greens.  The Australian Broadcasting Corporation’s Vote Compass asked respondents to rate their agreement with the statement “The construction of the East West link road tunnel in Melbourne should be cancelled”.  Over 30,000 people have answered this question with 46% disagreeing with the statement.  While 20% were either neutral or unsure.

All three parties have placed an emphasis on rail projects and public transport.  Labor’s platform proposes a major upgrade and expansion of the Melbourne Metro Rail, an investment in new trains, building free public car parks near train stations and providing 24hr public transport on the weekends.  The Greens have a major focus on regionally targeted public transport policies and moving freight off roads and onto rail.  The Coalition government has over seven major rail projects as part of their transport policies including an Airport rail link and $3.9bn investment in new trains.

Policies to invest in public transport appear to be electorally safe with 68% of respondents to the ABC’s vote compass agreeing with the statement that “The government should spend more on public transport, even if it means spending less on roads.”  However, as Dr Aaron Martin of Melbourne University points out, the vote compass which as of yesterday had over 124,000 respondents has revealed an electoral paradox in relation to transport policy:

Other major road projects included in both the Coalition and Labor transport policies are the widening of the Tullamarine Freeway and projects easing congestion in Melbourne’s south-east including Thompson Road.

Both Labor and the Coalition have a big ticket item for the longer-term which is the reduction of the most dangerous and congested level crossings.    Labor policy indicates reducing 50 and the Coalition’s is 40 crossings.  The Greens favour investment in improved signalling and their policy is being supported by The Public Transport Users Association, who has created a scorecard for the three main parties transport policies.

The results of the ABC’s voter compass and series of voter questions developed in conjunction with Melbourne University has Public Transport at number 5 and Roads at number 9 of voter policy priorities.  The graphic below outlines the priorities by political party preference: 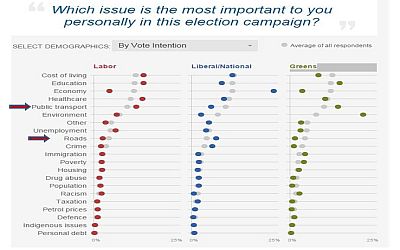 The funding for many of the larger projects are linked to the sale of state owned assets such as the Port of Melbourne, VicRoads Custom Plates division and the Land Titles Office.  All of these assets have been slated for sale between 2014 and 2017.  Relying on extracting the value and sale of state owned assets could present feasibility issues with regards to the scale and timing of election promise delivery.  Urbanist blogger Dr Alan Davies outlined several issues in his blog titled Could an Andrews Government really deliver on this promise?  Another Labor policy facing funding feasibility issue is the Melbourne Metro Rail project, which in an article by journalist Adam Carey did not pass The Age’s “truth” test.   The questions raised by both Andrews and Carey are not Labor’s alone.   The Coalition transport policies are also heavily reliant on the same funding stream.

While the major parties have prioritised policy platforms to deal with traffic congestion, it is noted that their policy documents do not outline their intentions for the congestion levy.  In January this year the congestion levy in Melbourne increased significantly along with an expansion of the levied zones and categories in 2015.    Earlier this year Parking and Traffic Consultants provided a brief of how this would impact car park owners.  With both major parties placing an emphasis on reducing traffic congestion and injecting major funding into public transport projects, increases to the congestion levy could be viewed as a natural revenue partner.

We’ve attempted to collate the main party’s policy announcements which will impact on roads, traffic, parking and public transport in Victoria.  It is by no means an exhaustive list and now is a good time to add the disclaimer that PTC does not offer any opinions as to the value of any of the policies mentioned.  Our interest is solely with regards to transport policy development in Victoria.