In September 2019, the ptc. family moved into a new home at 1 James Place, North Sydney. Located just 1.3kms from our previous address in Cammeray, the new office, with its stunning wraparound views, has been a hit with both staff and clients.

Interestingly, despite the short distance of the move (admittedly closer to North Sydney Station), there has been a disproportionate change in staff travel mode. Driving, which was in excess of 75% in Cammeray, was reduced to less than 6% since the move to North Sydney. This translates to effectively 8.2 tonnes[1] of carbon dioxide emissions saved on an annual basis. To put that in perspective, that’s essentially the same weight as six Hyundai i30 or a large African elephant. 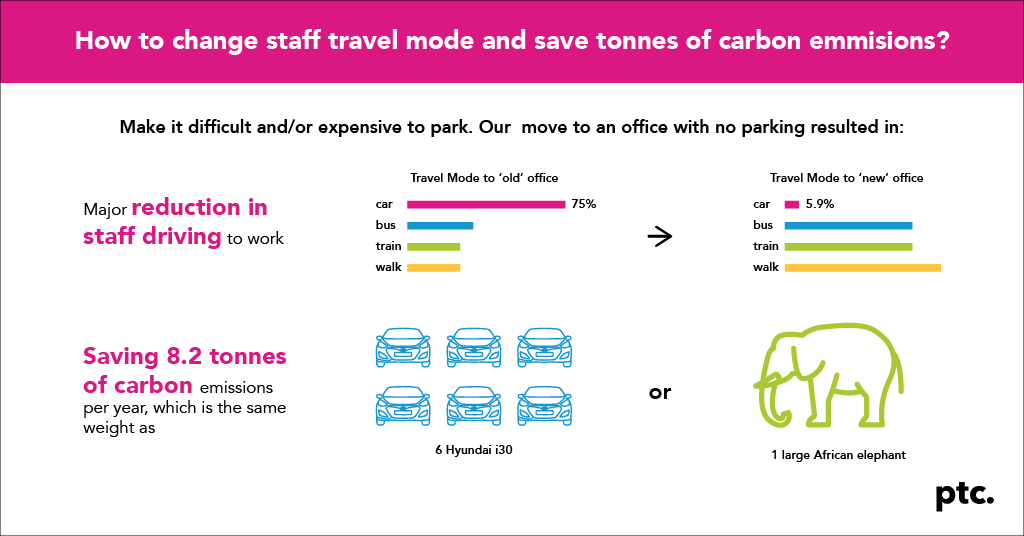 Now to address the elephant in the room (pun intended)… Why?

When asked why staff changed their travel behaviour, the results prove that the only thing they missed more than Maggio’s café[2], has been the free unrestricted parking that was available in Cammeray. 70% responded that the lack of free parking was the primary reason why they stopped driving to work, with only 30% responding that it was due to the location of the new office being closer to public transport facilities.

Having worked on many projects with clients to achieve a reduction in car mode share amongst staff (including the preparation of Green Travel Plans) we have often suggested that reducing the availability and/or increasing the cost of parking are the best way to achieve this. Now we have the data to prove it.

Like most humans, staff are notorious creatures of habit and will almost always adopt the most convenient option (Uber Eats anyone?). As such, initiatives to promote active travel behaviour in isolation of other more direct strategies, such as reducing the availability of cheap parking, are likely to be ineffective.

This was also concluded by Harvard Business School researchers during a study at a major European airport aimed to identify ways for organisations to encourage their staff to commute differently. Despite introducing a range of initiatives to promote carpooling and public transport options, the change in staff travel behaviour was less than marginal. The research concluded that these initiatives were ineffective because:

Of course we understand that withdrawing benefits such as free parking is fraught with danger.   Perhaps one option might be to highlight the environmental benefit by donating a portion of the expense saved from not providing free parking to a worthy cause.

The important message is that every firm can make decisions and put strategies in place to minimise its carbon footprint. If a team of 21 employees can make an impact, can you imagine what big organisations could achieve?

– The weekly average kilometres travelled by staff by car to and from the two different addresses;

– 44 weeks per year (public holidays and leave periods were discounted).

[2] A really good café opposite our previous office in Cammeray. We highly recommend it.

Share this:
PrevPreviousWe have much to be grateful for!
NextAndrew Morse speaks about parking facilities standards at the next AITPM EventNext