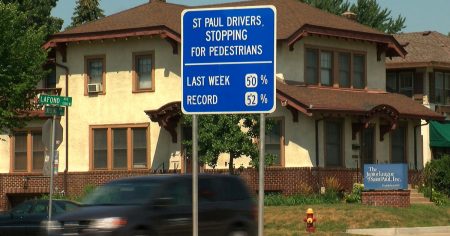 Although traffic engineering is in the realm of the exact sciences, understanding human behaviour and applying psychological principles can be useful to increase safety and compliant behaviour by road users. This is illustrated by an experiment conducted in the US, which was designed to increase the number of drivers stopping for pedestrians at crosswalks.

According to StreetsBlog USA, Nichole Morris, director of the HumanFIRST Laboratory at the University of Minnesota and her team monitored drivers yielding at crosswalks around St. Paul, Minnesota. The experiment was designed to analyse the outcomes of the Minnesota Department of Transportation high-visibility enforcement initiatives and to apply additional Human Factors Psychology tricks and engineering strategies to improve the results.

The initial assessment, made around September 2017, indicated that only 32% of drivers stopped at zebra crossings around St. Paul. One of the strategies used to improve that rate was installing signs at crosswalks promoting the percentage of drivers who stopped during the previous week and the record percentage (picture above).

By the end of the study, in October 2018, 77% of drivers were stopping at crosswalks, as reported by the Minnesota Daily. This was just one of the aspects of the study, which also included enforcement waves and drivers’ education as well as the use of other signs indicating the pedestrian crosswalks. The first wave focused on educating drivers, during which 1,000 were pulled over by police officers who delivered a flyer to drivers explaining the purpose of the education.

During the second wave in June 2018, signs were implemented. At this time, 44% of drivers were stopping at crosswalks. That was when press and social media coverage started, reinforcing the social norm and constant surveillance principles behind the signs. The third and fourth waves of enforcement took place in August and October, focusing on implementing new types of signs and enhancing existing signs.