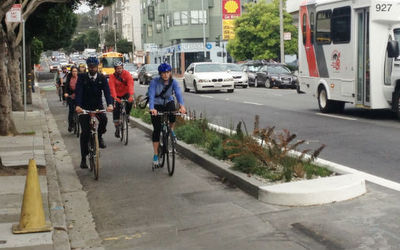 Last week, the USA’s National Association of City Transport Officials (NACTO) released a study showing the correlation between protected bicycle lanes, bike share increase and safety.  NACTO compared data from 2006 to 2013 of seven American cities regarding the number of bike lanes miles (excluding signed paths with no other enhancements), the number of cyclists killed or severely injured and the number of cyclists counted. The graph below shows the aggregate data relating to Minneapolis, Portland, Philadelphia, New York, San Francisco, Chicago and Washington DC, demonstrating the risk reduction as cycling and protected bike lane miles rise. 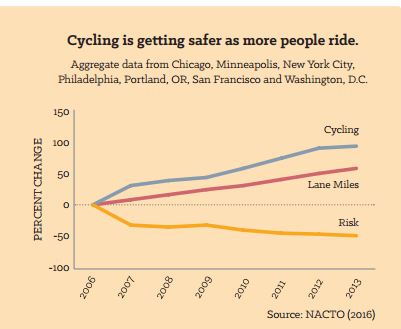 As we already discussed in the Wayfinding Forum Blog, protected lanes improve bikers’ safety and encourage cycling uptake, especially for people that are cautious of riding in unprotected cycling paths.  NACTO also points out that implementing a bike share system and developing a quality bike network are good strategies to increase the number of cyclists, which triggers the “safety in numbers” phenomenon.  More cyclists on the streets increase their visibility as a group, reducing the chances of individuals being struck by distracted drivers.

NACTO argues that an accessible bike share system with a safe and extensive bike network can positively affect social equality as well by increasing the reach of the public transport system and improving commuting for low-income households.  Americans earning less than USD 20,000 per year are twice as likely as the rest of the population to depend on bikes to address their transportation needs. Therefore, to maximise its social effect, policies related to bicycle usage require the consideration of low-income users and need to include less privileged city areas and not only central regions.

In Australia, Melbourne and Brisbane were the first cities to introduce bike share systems and they are not performing as well as in other countries. According to a 2014 study, each one of Melbourne and Brisbane’s shared bicycles were used less than once a day. In contrast, New York City’s shared bikes registered five trips per day and London and Washington’s three.

The convenience of having a car, the inconvenience of docking station locations and perceived danger were the main factors discouraging bike share membership. NACTO also indicates that mandatory helmet laws reduce shared bicycle ridership.  In Melbourne, 61% of people who don’t use the bike share scheme cited difficulties in finding a helmet or not willing to wear one as the main reason for not cycling.  A previous article posted on the Wayfinding Forum Blog discusses the effects of mandatory helmet laws and its inefficiency in improving safety.

Other Australian cities intend to implement bike share systems. Last October, Mayor Clover Moore said that the City of Sydney has plans to implement its bicycle-sharing scheme in 2020. Perth launched its plan in March and aims to have shared bicycles available at the metropolitan area by next month.