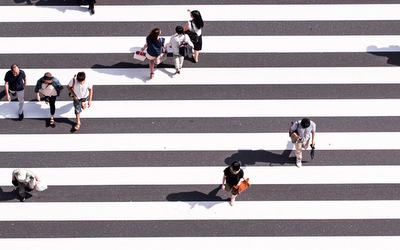 The National Association of City Transportation Officials (NACTO) from the USA presented in the 2016 Transit Street Design Guide a comparison between different modes of transportation regarding their capacity to move people within a single lane of road. Traditionally, streets are evaluated according to vehicle traffic throughput and speed, the proposition being that as a city transit’s objective is to move people, it should be measured by the capacity of doing so.

Using that concept it was found that the most ineffective way to transport people is by private cars. Considering one or two people per vehicle, a 3.04-metre lane has the capacity of moving 600 to 1,600 people per hour. The numbers increase dramatically for a two-way protected bikeway, which has the ability to transport 7,500 people per hour and a sidewalk capacity of 9,000 people per hour, always using the parameter of a 3.04-metre lane. NACTO used previous studies to determine the parameters in each case: for pedestrians 60 people per metre per minute, allowing 1.5 square metres per pedestrian and a 75 metre per minute walking speed. For bicycles, it was assumed that 2,500 bikes per metre per hour can travel on cycle paths.

The best results are achieved by on-street transitway, bus or rail, with 10,000 to 25,000 people per hour capacity. For NACTO “transitways are running ways dedicated to the exclusive use of transit vehicles, protected from incursion by physical separation”. The infographic below shows the full picture of the differences.