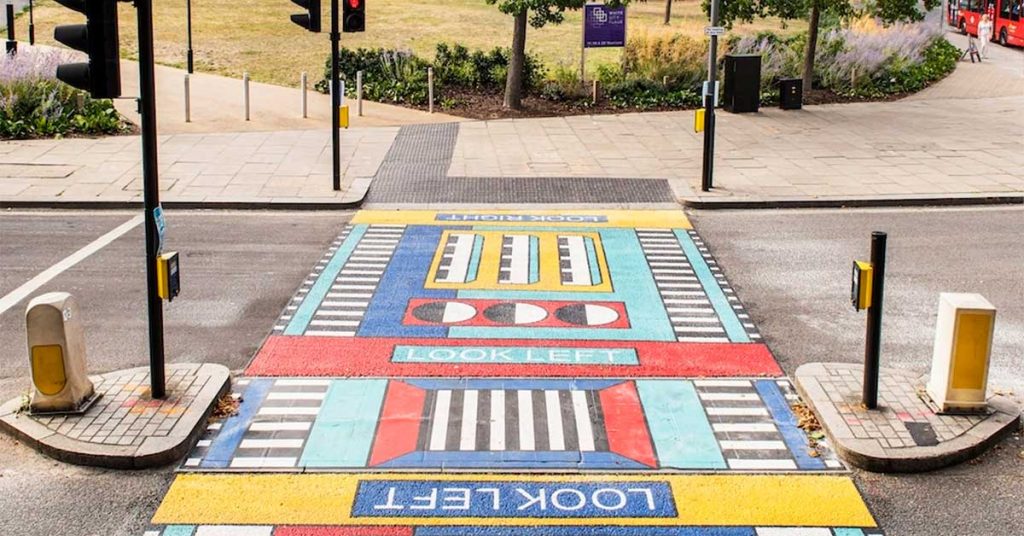 Artistic interventions on streets are part of placemaking and tactical urbanism strategies implemented in cities around the world. As a recent example from London, an artwork by Camille Walala (image above[i]), prompted us to write a post about these beautiful but sometimes controversial installations.

These projects are usually welcomed by the community but, in some cases, they face the objection of government departments concerned about pedestrian safety. Non-traditional pedestrian crossings seem to be particularly controversial as critics say that the consistency of road signage is important to ensure drivers identify the crosswalk and are, therefore, able to stop for pedestrians when needed.

In the US, the Federal Government have warned local government authorities in different occasions to remove these type of crossings deeming them unsafe.  However, apparently the Government has failed to provide data to support this claim.

In Sydney, the iconic rainbow crossing at Oxford Street was removed in 2013 by the order of then NSW Roads Minister Duncan Gay due to safety concerns. However, Sydney Mayor Clover Moore commissioned an independent audit which found that no injuries or accidents were caused by the special crosswalk.  A new rainbow crossing was installed at Taylor Square in 2018.

The City of Seattle has installed more than 40 special painted crossings or community crosswalks, as they call them. A specific program was developed for the community crosswalks which contains guidelines for their installation, some of which are clearly in place to minimise risks. For instance, the crosswalks can only be implemented at locations where there is a raised crossing or intersection or where vehicles are already required to stop, either due to a traffic signal or a stop sign.

Seattle has been monitoring the non-traditional crosswalks and reported no pedestrian collisions during the first year.

It would be interesting to see a broader research on the safety of these artistic interventions to ensure the implementation of effective guidelines. While we wait on that, some measures can be taken to minimise risks such as restricting these non-traditional crossings to calmer streets and ensuring that supporting signage is installed (stop signs, pedestrian crossing signs, zigzag line marking, etc).

What is your opinion on artistic pedestrian crossings? Do you support them or not?